The weather overnight had changed from clear to raining when we woke this morning. The boys again were off with their instructor to go skiing on at First. Everyone else was sleeping in and so I took them to the cable car station (which is only about a 2 minute drive). Most people walk to the station but it isn’t the easiest thing in the world to walk with ski boots on and carrying your ski’s and poles so they get the luxury of being dropped off instead.

By the time the res

t woke up it had stopped raining but was heavily overcast and stayed that way the rest of today. Helen, Chloe and I decided to walk down into the town of Grindelwald (it is only a 100 meter walk down to the main road) and to do some shopping. We did all the shops on both sides of the road and managed to buy a few things (mainly chocolate). There is a chocolateer in town and they were selling 99% Lindt chocolate (the picture of my Dad is after he has savoured it). If you have never tasted it then contact us when we are back and we will happily let you try. It comes with it’s own set of instructions for eating it! The most important purchase we made (and Josie will be proud of us) was tomato soup. This is the best tomato soup you can ever buy (and probably the most expensive as well).  It is actually tomato soup, basil and the secret ingredient of gin. We

bought the last remaining 6 tins from the supermarket. 3 for lunch and 3 to take home!

By the time we got home the boys had already arrived home from their skiing. It turned out that the wind was blowing so hard at the top that many of the ski lifts were closed and only one was open. They skied all the routes they could and they had to walk up a 100 meter slope with the ski boots on. Michael said he just collapsed at the top when he got there. Stephen said at one stage the snow was being blown perpendicular with the ground. Not ideal skiing conditions.

After lunch Helen and Michael decided to go back to Bodmi and ski some more. Helen was planning to do that as her last skiing for the trip and to hopefully solidify all the lessons. Michael just wanted to get in some more skiing (even though it was raining). What I have not mentioned is the number of Japanese that are present at Bodmi trying to ski. I say ‘trying’ to ski because that is the best description. They are absolutely clueless. Yesterday I watched one of them ski down a small slope and clearly lose control. The instructor yelled at him “use the emergency brake”! Everyone looked at him confused and he called out “your bum”! They use that a lot from what I saw. Yesterday Michael helped one guy repeatedly because every time he skied past him he was off his ski’s and on his bum. Helen said it was so bad today that the magic carpet had to be stopped numerous times because they didn’t know how to get off at the top. I am not sure why all the Japanese come to Switzerland to learn how to ski (or not) when they have plenty of snow in Japan. Maybe I should point that out to them.

Dinner this evening was a traditional Swiss dinner of raclette and sausage (wors). Raclette (for those of you who don’t know), is a type of cheese. You eat it melted on potatoes (you buy special raclette potatoes even). You each get your own little frying pan of melted cheese and you pour it over the potatoes. We have one of the machines 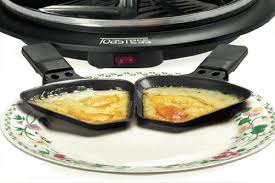 in Cape Town actually which reminded us to have some people over to enjoy a traditional Swiss meal of raclette with us when we get back. What is essential is to enjoy it with a good bottle of wine which enables you to eat more cheese than you otherwise would be able too.  Germans (and Swiss) also know how to make sausage. They have over a thousand different types of sausages registered.

That’s the Swiss food lesson for today (especially for you Josie). You probably all have the impression that all we have done is ski, shop and eat. That would be pretty much correct. I am feeling more and more relaxed the longer we are here.

One thought on “And some more skiing”